Windows 7 being better than Vista is saying a lot. Microsoft may have a huge PR advantage as people will compare it to Vista and think it is good so “angels will sing again” like they did with Windows 95 compared to Windows 3.1. So maybe Microsoft did this on purpose.

He also talked about what 2009 had in store for the Linux desktop;

Look at what Firefox has achieved and how it is creeping up on Windows. It is important projects like Firefox and OpenOffice.org which are spreading the whole notion of open source wider. They work cross-platform and the project shouldn’t be tied to the platform. People will realise the lack of tie-in means you can chose a platform and that is much healthier from the market standpoint than having to make a platform decision for an application.

The Stuff Gadget Awards was held on wednesday night in London at the Dorchester Hotel, and the big winner of the night was Asus winning the gadget of the year award for the Eee PC 901.

This great little laptop has helped to kick off the netbook craze and has offered a really affordable way to be online and mobile, as well as offering people the Linux operating system, which we here at superuser.com applaud. Well done Asus.

I was reading desktoplinux.com and found this interesting article:

Lenovo, which years ago purchased IBMs personal computer business, appears to have quietly stopped offering Linux as a pre-installation option. None of the company’s 49 ThinkPad and IdeaPad notebook models — nor its many ThinkCenter and IdeaCenter desktops — can currently be ordered with Linux.

Lenovo does offer four high-end ThinkStation workstation models without any commercial operating system software, but all of its other systems now carry the “Microsoft Tax,” it appears. That is, in order to purchase one of the systems, you have to pay for a Microsoft Windows operating system license.

Lenovo’s executive director of external communications, Ray Gorman, denied in vague terms that the current situation marks a strategic shift, though he did admit the company is “refining its Linux strategy.” He added, “Lenovo is not abandoning its commitment to choice of operating system, and actually is increasing the role of the Linux operating system in Lenovo’s product portfolio.”

All evidence to the contrary.

Gorman continued, “In 2008, Lenovo offered preloaded Novell SLED 10 Linux on some of its ThinkPad notebooks, targeting business users. We are now seeing greater demand for Linux from consumers and those in education, and are bringing Linux preloaded on soon-to-be announced Lenovo netbooks targeted to education.”

Actually, Lenovo already announced its Linux-based S9 netbook models, when it launched its netbook line about a month ago. However, the company provided pricing and availability information only for the Windows XP-based “S10” model, saying that the Linux-based “S9” model would be limited to overseas education markets.

In other words, if the government of some large country wants to order a few hundred thousand of them, they’ll build some, and not before.

Anyway, interesting news, wanted to share it with you. Very tired, off to bed. Peace out…

I recently wrote about Elonex laptops preloaded with Linux being made available at the Carphone Warehouse. They are in such high demand that thieves stole a shop display model, but ignored the larger laptops sitting nearby which were preloaded with Microsoft Vista.

This was obviously a planned robbery as they used bolt cutters to steal the laptop.  So even thieves don’t want Vista it would appear…

PC World has this week published an article encouraging small businesses to shift from Windows Vista to Linux:

Since Windows XP remains available only as a “downgrade” from Vista, at additional cost, businesses that want to replace obsolescent PCs or need to add staff are compelled to buy Windows Vista and then pay extra if they want to stay with Windows XP. In order to avoid the cost of “downgrading” to XP by migrating all desktops to Vista, they’re faced with the added cost of all new Vista licences, plus high hardware replacement costs because Vista requires new PCs kitted out with at least 2GHz CPUs and 2GB of memory in order to run acceptably. Then there’s also the fact that Windows Vista performs poorly, even after SP1.

Businesses that cannot bear such a large hit to their IT budgets should consider migrating to Linux instead. All of the Linux distributions are available either entirely free of charge or at relatively low cost. Linux runs well even on older PC hardware, which means businesses can avoid having to purchase all new desktop PCs (if you need Linux or PC repairs or support in Brisbane click here for Superuser’s help). All of the major Linux distributions include free file and print servers, website and email servers and clients, office productivity applications, development toolsets and utilities.

If you’re already doing without dedicated support staff for Windows, one year may be all the paid support you need for Linux. Ubuntu users joke that simply googling for technical support usually results in the exact answer you’re looking for on Canonical’s forums. Linux is different from Windows, but it isn’t an alien life form.

The human investment you make in transitioning away from expensive Windows and Office licenses may pay for itself quickly. More important, you’ll be free to run the desktop and server software of your choice, on hardware you can afford.

The Origins of Linux – Linus Torvalds

The second largest computer maker in the world said it had chosen to offer Linux in response to customer demand.
Earlier this year, 100,000 people took part in a Dell survey. More than 70% of respondents said they would use Linux. Read more… 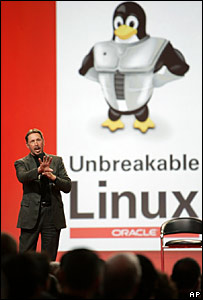 Thanks again Dominik Aniszewski for the info.

“One of the issues I have is that the most important thing is good technology. It’s not about being commercial or non-commercial, open source or closed source. To me, the reason I do open source is, it is fun.

That is the most basic thing. “I also happen to believe that it is the best way to, eventually, get the best end result. Part of that is the ‘eventually’. At any particular point in time, it may not always be the best thing right then,” he said.

He also talks about the GNU GPL and DRM. Read the whole article.

Wikipedia: [[Linus_Torvalds]] is best known for initiating the development of the Linux kernel.